Prelude # 10 from 12 Preludes for Solo Guitar by Ken Hatfield 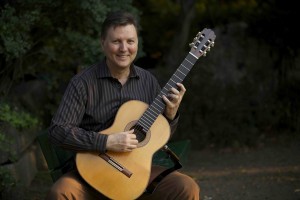 Even with pieces as short as some of these preludes, there are multiple levels of information going on at any point in the music. So, rather than confuse you by presenting too many concepts at once, I’m choosing to focus on limited aspects of each prelude. The guitar tip for Prelude # 10 is no exception; it focuses on: (1) the prelude’s overall form, (2) how the bottom voice changes roles, from melody to bass line, and (3) the harmonic deviations from its diatonic center, occurring in secondary sections (i.e., the bridge and the coda).

This prelude’s form is unlike those of its predecessors, especially those that are in a standard song form. It is based on a primary idea/theme that is morphed and moved around in a manner that I think of as a kind of journey.

This theme occurs in the first two bars. But unlike what you might expect (especially if you’re well versed in the “Chord Melody” approach to creating and/or performing solo guitar music), the melody (or what functions as the melody) is often in the bottom voice (i.e., the bass), not the top voice. Right off the bat this gives Prelude # 10 a very different “feel” and sound. But the melody doesn’t stay exclusively in the bottom voice, as I take the forward momentum this bottom voice creates and transform/morph it into more of a true bass line. The basic rule of thumb for recognizing these differences on the page is: whenever the bottom voice is dividing the 3/4 into two accents (i.e., dotted quarter notes each equaling half of the bar), then this part resembles a bass line. Conversely, when it is beamed in connection with two additional eighth notes into groups of three, it is functioning as the melody.

Part of the modus operandi of Prelude # 10 is actually the free play within the role-playing and role switching of its various parts/voices. Basically the bottom voice is the melody in bars 1 and 2, bars 15 and 16, bars 19 and 20, and bars 23 through 26. Elsewhere in the prelude’s main section (including this section’s repeat), i.e., bars 1 through 36, the bottom voice either is or hints at being more of a bass line.

There are two additional sections that serve as diversions from the unrelenting momentum of the pulsing eighth notes grouped six per bar in the prelude’s main part: (1) bars 37 through 52, and (2) the coda—bars 53 through 59. Both of these sections are harmonically more adventurous than the main body of the prelude. Bars 1 through 36 remain diatonically within the key indicated by the prelude’s key signature, i.e., the key of three flats. In other words, this entire section stays diatonically within Eb Major.

The first contrasting section (beginning on bar 37) begins in Cb Lydian for two bars, before going to Fb∆ and Gb7 (bar 39) moving on to ab–9 to Db∆ (in bar 40). The next line begins in a different key but in similar fashion: i.e., C Lydian (using C to D/C) moving to b Aeolian (via b– and e–) in bar 42, moving on to G Major for the next two bars (comprised of a II V, i.e., a–7 to D/F#) followed by G∆ to e– in bar 44. Bar 45 is harmonically ambiguous because its first chord has no thirds, but the missing note(s) can be inferred to be either “D” or “C#”, because the second chord is an E/B, making the first chord either f#–/A or D/A. These two bars are really just a harmonization of the bass line built upon an “A” Major tetrachord. The next three chords come from the key of D Major functioning as: IV to V to VI– to V of V, modulating to chords diatonic to the tonality of A Lydian which follows in bars 49 and 50. Bars 51 and 52 are just chromatically descending II Vs: i.e., f#–7 to B7 (bar 51) moving to f–7 to Bb7 (bar 52). This last bar contains chords that are functioning as II V of our tonic Eb, in keeping with the Da Capo that returns us to the top for our recapitulation.