Prelude # 9 from 12 Preludes for Solo Guitar by Ken Hatfield 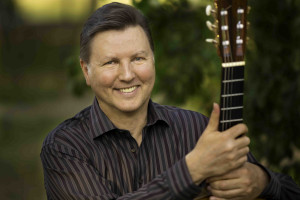 I asked some of my students to play through these preludes prior to having the actual books printed, a practice I’ve found useful, especially for checking fingerings, as I rarely use them myself. Many have found Prelude # 9 to be the most “daunting” of the collection. And while it is a bit more technically challenging than the others, and is in what some consider an uncommon time signature (i.e., 5/4), in addition to containing harmonies of a dissonant nature that some find a bit “thorny,” overall both its form and content are relatively simple.

First, let’s check out the form of Prelude # 9, which is divided into three basic parts plus an ending vamp-like section:

Now let’s examine the content from a harmonic function perspective:

I hear this as being a very basic idea built upon two chords from an Ab Mixolydian tonality (i.e., Ab7 (add4) to Gb sus#4) that are voiced to take advantage of the fact that, by merely changing the bass note, the chord changes, and while the first chord is dissonant due to including both the Major 3rd and the Perfect 4th, the second chord is almost a power chord (i.e., perfect 5ths only), except for the dissonance that exists in the previous chord (i.e., the Ab’s ∆3rd which is now the Gb’s #11). The repeat of these chords is then set up by a chord from our tonic chord’s (yes Ab(7) can be a tonic chord) subdominant minor region: i.e., b♭Ø7/Fb. Just remember that any chord containing the minor 3rd of the chord built on the 4th degree of our tonic key (even if that tonic key is Ab Mixolydian) can suggest the subdominant minor region, creating an alternate “leading tone” that yearns to resolve downward. In this case the Fb (the flat 5 of our b flat half diminished chord) in the bottom voice of the last chord of bar one wants to resolve down to Eb so strongly that this chord convincingly gets us back to the Ab7 (add4) that starts the next bar, even though that Eb is only suggested (not played) as the first overtone of our tonic chord! The second bar mirrors the first with a different final chord: A7,9,13, which functions as a substitute dominant 7th chord of our tonic chord.

Here is how the basic two-bar phrase moves through the exposition section: bars 3 and 4 are an obvious variation on bars 1 and 2, with bar 4 using the symmetry of three successive Dominant 7th chords whose top voices outline a descending symmetric diminished scale by going from the #9 to the b9 on each chord, leading us to a dominant 7#11 chord to conclude bar 4. This yields: Eb7 (#9 moving to b9), followed by Db7 (#9 moving to b9), followed by Bb7 (#9 moving to b9), getting us to A7#11. The harmonic function of these chords within the Ab Mixolydian context are: V7#9 (top voice moves to b9), IV7#9 (b9), bVI7#9 (b9) to subV7#11. As I’ve mentioned, this basic pattern is then mirrored and moved around with and without variations into different keys and tonalities. So the next two bars begin like the previous three passes of this two-bar phrase, but the second bar goes A∆7, to g#–7/B, to Ab(b13) cadencing to db–6.

Bars 9 and 10 mirror our basic genetic idea in Cb (i.e., up a minor third). The next two bars repeat the initial two bars reinterpreting the last chord (A7,9,13) as V of the key we’re moving to, D Mixolydian (so the same chord that ended bar 2 is now V of D, not subV of Ab). This is a great example of one of my prime teaching mantras: “CONTEXT DETERMINES FUNCTION!”

This all gets us to the development section, which is analogous to an improvisation loosely based on the changes the bass-line of the first two bars (i.e., our primary theme) suggest. I’ll leave the actual harmonic analysis of these twelve bars to those that know how. For those that do not, I’ve given you enough clues in the harmonic analysis of the exposition section to guide you.  Just realize that I’m freely playing with reinterpreting the harmonic functions of many of the chords, especially those that end bars or phrases, to get to different tonalities than those that occur in the first sixteen bars.

This procedure continues in the recapitulation section (bars 29 through 44) as I strive to create a sense that the improvisation/development (representing events happening to the theme) alter the theme as it’s stated in the recap. Without putting too fine a point on it, this is analogous to how life affects a character we follow in a story.

The results are: the next eight bars (bars 29 through 36) are an exact copy of bars 1 through 8.  Reinterpreting the db–6 that concludes both bar 8 and bar 36 as V–6, we move to a mirror of our primary theme in f# Dorian that poses a question that is answered a fourth lower in c# Dorian. This is a loose but accurate interpretation of the first four beats of bars 37 and 38. Though the last chord of each bar is a Dominant 7#11 chord, I treat each of these chords differently: the D7#11 that ends bar 37 functions as a subV7 of the c#–11 that begins bar 40, while the A7#11 that ends bar 38 functions as V of the d–11 chord that begins our next genetic permutated replication in d Dorian for bar 39 and again down a fourth in a Dorian for bar 40. As in the preceding two-bar version of our theme, the last chord of each bar is a variation (Bb7#11 in bar 39 and F7#11 in bar 40).

This gets us back to our final thematic statement, this time employing the version from bars 3 and 4 for bars 43 and 44.

The last eight bars are a vamp-like tag based on the chords of the theme played as connected arpeggios, with a V chord added to the end of each two-bar phrase. All of this leads to a rallentando employing a paraphrase of the way the developmental section begins, and concluding with a deceptive cadence . . . Fb∆7 (a chord which contains our tonic’s root, i.e., Ab as its Major 3rd).