Prelude # 2 from 12 Preludes for Solo Guitar by Ken Hatfield 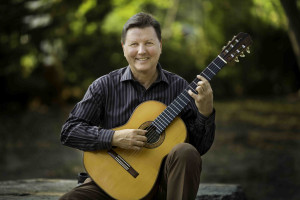 As I mention in the introduction to 12 Preludes for Solo Guitar, I employ key signatures to illustrate the many different tonalities a given key signature can represent beyond the traditional association with a Major key or its relative minor. Since there are three different diatonic types of Major tonalities (Ionian, Lydian and Mixolydian) and three different diatonic types of minor tonalities (Aeolian, Dorian and Phrygian) occurring within every key associated with each Major key signature, as well as Locrian (occurring on the 7th degree and associated with half diminished chords), in addition to the minor options occurring in Melodic minor and Harmonic minor tonalities, limiting our interpretation of any specific key signature to either Major (Ionian) or the relative minor (Aeolian) seems so restrictive for music that is harmonically adventurous, that it can be misleading.

I’m not alone in this belief. In fact, much of the music of the 20th century is written with no key signature (especially so-called “modern” music . . . . Of course, that can create the problem of misinterpreting the “no key” key signature as being in either C Major or a minor.). Obviously, this can all be avoided by listening and analyzing the actual harmonic and tonal content of any music one is performing. Encouraging that practice as well as demonstrating why it is so crucial are in part the impetus for creating many of the preludes in this collection.

Prelude # 2 explores many of the possible minor tonalities that could use “E” as their tonic while passing through several other minor tonalities that are related to these tonic minor tonalities. The two chords in bar 1 diatonically occur in e Melodic minor (e–∆7 and A6, a.k.a. 1st inversion f#–). This tonality (e Melodic minor) contains what Arnold Schoenberg referred to as the “raised” form of the pivot tones (i.e., the Major 6th and Major 7th degrees of a minor scale). And what distinguishes Melodic minor from Aeolian are these 6th and 7th scale degrees, which are contained in the two chords comprising bar 1, while the “lowered” versions of these same scale degrees indicate Aeolian and are contained in the two chords found in the second bar  (a–6/B and C∆9). Taken together the four chords of this two-bar phrase create what I call a “hybrid” minor tonality vamp-like sequence that touches on the two types of minor tonalities found in what many call the “traditional minor” scale. This traditional minor is the one we all know from Segovia’s famous Diatonic Major and Minor Scales book, i.e., the one that ascends in Melodic minor and descends in Aeolian.

This pattern of creating short harmonic phrases that illustrate various types of minor tonalities continues throughout Prelude # 2, and in the process touches upon Dorian, Harmonic minor and even Phrygian, in addition to the aforementioned Melodic minor and Aeolian. Now, that is not all that is going on in this prelude, but it is what we’ll focus on for this blog/guitar tip post.

I consider Prelude # 2 to be of the “disconnected” or stand alone variety, since it does not introduce a larger work or movement (like a fugue) and, while clearly in e minor, it’s a bit too harmonically thorny to be used generically (though these are general statements for which the creatively gifted could easily create credible exceptions). For more information on the three basic historical periods for preludes and their corresponding “styles” or varieties, see the excerpt from the 12 Preludes book’s introduction included in my post pertaining to Prelude #1.

The harmonic “free play” of chords from e Melodic minor and either e Aeolian or e Harmonic minor pretty much characterizes the first eight bars of Prelude # 2, the only exceptions being the second chord of bar 4, i.e., Bb (9 #11) functioning as sub V of IV–, and the secondary II sub V of IV– occurring in bar 8. (For those unfamiliar with the secondary II Vs or the substitute dominant chords mentioned, or the “dominant approach” harmonization of the “g natural” melody note as a C7 chord occurring on the last 16th of the 3rd beat functioning as a quick substitute dominant of the b–7, i.e., II–7 chord in bar 8, see Chapters 5 and 6 of my book Jazz and the Classical Guitar: Theory and Application.)

Bar 8 culminates with a substitute secondary V7 of IV– getting us to bar 9, where this relative IV minor region becomes the springboard to move freely via voice-leading through a series of chords touching on the relative Major associated with the key signature of one sharp and several secondary dominant chords built upon a bass line diatonically extracted from one of the various minor tonalities previously referenced. So in bar 9 we find IV– going to E+, to D7 (V7 of the relative Major), to G (tonic of the relative Major), becoming V+, then to V7 of the e minor tonic chord, deceptively cadencing to C6 (an inversion of a–), then C#O to get us back to G Major (this time as I/V in the relative Major or III/bVII in Aeolian), where I use G Major’s subdominant minor region (c–) to reinforce the Major tonality before mirroring that harmonic sequence to create harmonic motion leading to the I–/V and a chordal sequence built upon a bass line based on the ascending form of the Melodic minor scale whose last chord is F7b5 (functioning as a sub V of I–). This sets up a two-bar vamp comprised of a harmonization of a simple chromatically derived melody line (e up a minor third to g, then descending chromatically to f#, and then to f natural before it repeats). This chromaticism in the soprano voice is mirrored in the alto voice which, when combined with the bass line and tenor voice, creates the following chord sequence: I–, to I–∆7, to I–7, to V of V, to sub V of I. (This F/A and F/B are inversions of what is referred to as the Neapolitan chord in some circles.) This vamp leads to a recap of the initial eight bar sequence.

All of this brings us to the last ten bars of Prelude # 2. Beginning in bar 27 we seem to be mirroring the previous visit to the IV minor region that occurred in bar 9. While we do start bar 27 on an “a” minor chord, the antecedent and consequent phrases built on a harmonized bass line (chord tones: 1, 3, 5, 6) quickly lead us to the set up for the final cadence that concludes the prelude on another Neapolitan chord, which I call a Lydian chord because it alludes to the Phrygian mode. In the process we touch upon/pass through: IV–, bIII∆, bII∆, Vof V, IIØ, VIØ, and bVI∆.