Prelude # 3 from 12 Preludes for Solo Guitar by Ken Hatfield 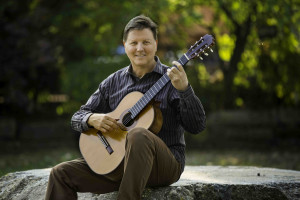 Prelude # 3 is one of the shortest and simplest of the 12 preludes in this collection. It is very much in the “unconnected” style (see references and definitions of the three historical prelude styles in previous prelude posts). It is also reminiscent of the preludes of the Baroque era (though more Vivaldi than Bach). And it remains predominantly in the harmonic territory indicated by its key signature: b minor (i.e., one of the two traditional interpretations associated with the key signature of two sharps). However, within that b minor key you’ll find that I move about a bit, touching upon other tonalities, both those closely related as well as a few more distantly related.

The first eight bars are predominantly in b Aeolian (in perfect alignment with the key signature). In fact, until bar eight, there are no accidentals. In bar eight an A#O7 (functioning as a substitute for an F#7b9 chord) occurs to set up a repeat of the first four-bar harmonic idea.

It is at bar thirteen that some new (i.e., non-diatonic) harmonies first occur. These are created via voice leading and touch upon what are all essentially variations of a secondary dominant chord, i.e.: V of V (in this key C#7) as it would relate to the key of b minor (in other words, containing this dominant 7th chord’s flat 9th degree . . . i.e., “D” natural). This yields the following harmonic sequence: C#7, to g#Ø7/D, to C#7, to C#/B, to an augmented chord with a missing root created by keeping the top two voices the same (i.e., B and E#),while the bass line follows the scale downward (C#, B, A to G#) to get us to an E#O/G# chord, which, just like the previous diminished 7th chord, is functioning as a substitute for a dominant seventh chord: C#7, thus making this entire four-bar phrase in essence a secondary II V of V.

The last chord of bar 16 is functioning as V of V, and it takes us to bar 17, for what is essentially a mirroring of the first eight bars, but on the fifth (i.e., in f# minor). This move to the fifth is classic, and so endemic of the era, and was so common in the Baroque period, that it eventually became the traditional first move for both writing fugues and of Sonata Allegro form.

This brings us back to the recap of the original harmonic idea, which the first eight bars is based on, albeit with a few variations (most derived from chromatic alterations of what would be merely diatonically available tones) touching on several other “types” of minor tonalities (primarily Dorian and Melodic minor), culminating in a traditional cadence, convincingly establishing/reinforcing the primacy of b minor as our tonic. In the process we pass through: E#O7 (bar 28) to get to f#­–11, to c#­–­9/G#, to G#O7 (bar 31), to A#O7 (bar 32), to b–, to G∆7, to c#Ø7/G, to F#7, to b–, to C#O/B, concluding on a root position closed voicing of a b– chord.