Prelude # 4 from 12 Preludes for Solo Guitar by Ken Hatfield 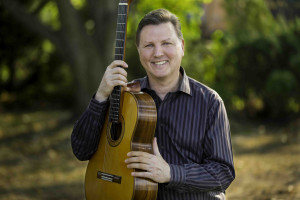 Some of you will recognize that Prelude # 4 is basically a blues, or, more accurately, it is based on the relationships between the three primary tonal centers characteristic of all blues: I, IV & V. Like many of the more sophisticated blues chord progressions that jazz musicians have developed over the past century, there are many harmonic moves within the characteristic tonal regions of Prelude # 4 that may not be so easily recognizable to those only hip to simpler traditional blues chord progressions.

There are two guiding principles at work here. Understanding them will make it quite easy to follow what is happening in this prelude:

(1) As long as the three basic tonal regions or centers maintain their relationships, any kind of harmonic motion that credibly connects one region with another or that moves around within one of the regions is perfectly acceptable, and

(2) The deconstruction and/or emphasizing of one region over another (especially via substitution) is a device that can and will heighten tension . . . much like delayed gratification. I apply this second approach during what can be interpreted as the “improvisational/developmental” sections of Prelude # 4.

To start with, let’s break the basic form down into a series of 12-bar chord progressions that are repeated. The basic blues form is first represented (and is repeated) in bars 1 through 12. The first ending is another 12-bar section that is analogous to an improvised chorus that is somewhat deconstructed in that we stay predominantly around the region of the I tonic tonality with a brief visit that takes us to tonalities related to the bIII region. We then repeat the initial 12 bars, mirroring a rondo (this repeating of the basic idea between the blowing/developmental section is related to rondo form) to get us to the second ending. The second ending is the second improvisational section and is based upon the ideas presented in the first ending, but here we investigate the I tonic region and the IV subdominant region (i.e., the first two primary tonal centers associated with the blues).

This brings us to what is in essence the third repeat of the initial 12-bar blues form (bars 37 through 48) functioning as yet another of the repeats one would customarily encounter in a rondo. At bar 49 we arrive at what will be the only of the three “improvs” to touch upon all three regions: I, IV & V. As I alluded to before, this delaying or holding back visits to all three regions until the final “chorus” before the recap, is intended to create an increase in intensity. It also allows for a bit more focused exploration of each tonal center by balancing what is implied with what is stated and what is withheld.

This all brings us to the final 14 bars, which are a recapitulation of the primary thematic material this particular 12-bar blues is based upon, combined with a 2-bar tag ending.