Prelude # 5 from 12 Preludes for Solo Guitar by Ken Hatfield 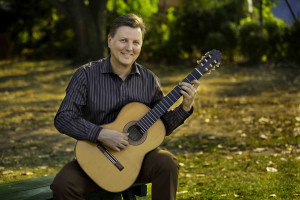 Prelude # 5 is a deeper exploration of concepts I introduced in the guitar tip for Prelude # 2, i.e., the use of a key signature to represent more than the traditional Major/minor tonalities we’ve all been taught to associate with each of the 12 key signatures of the western harmonic system. I also reference this concept in the introduction to the 12 Preludes book. So, to avoid redundancy and encourage you to support the cause by buying the book when it is released on July 15, 2016, I won’t repeat what I’ve said elsewhere.

Prelude # 5 is in E Major, but not in E Ionian; rather, it is in E Lydian. Since I want the performer (and hopefully the audience) to “hear” E natural as the tonic, I chose to use the key signature of four sharps to exploit its association with the key of E Major. I then add the raised 4th degree (i.e., A# in this key) that is characteristic of the Lydian mode whenever it is needed as an accidental.

Now, for some of you the concept of three types of diatonic Major and three types of diatonic minor tonalities within each and every Major key is new, and a bit alien to how you experience music. It is not the purpose of this particular guitar tip to explain all that entails. If you don’t understand what I am referring to, I encourage you to study harmony and theory to expand your conception of how our harmonic system actually works. It will be enlightening.

The first two bars of Prelude # 5 clearly establish the tonality as E Lydian. This is achieved by exclusively using chords that are diatonic to that tonality, particularly the ones containing the characteristic raised fourth scale degree: E∆#11, d#­–7, c#–7, and B/D#. This is then mirrored even as it is contrasted in the next two bars by paraphrasing the melodic and harmonic motion of the first two bars, first in a contrasting tonality: G Major, and then in the tonality where E Lydian originates: B Major.

The next two bars (5 and 6) are a repeat of the first two. We then move up a fourth mirroring the basic theme in A Lydian, in the process touching upon the subdominant minor of E Major (i.e., a–) to reinforce E as our tonic. This leads us to the V (or several chordal variations voiced over the V functioning as a pedal), which sets up the deceptive cadence that begins our bridge at bar 9.

Our bridge is yet another journey into a Lydian tonality: C Lydian and its parent Ionian tonality: G major. This four-bar section is an antecedent and consequence phrase, whose question is answered to set up a move in bar 12 that takes us to a second bridge in yet another Lydian tonality: C# Lydian. This C# Lydian phrase sets up its own question and answer with an answer that is really in g# Dorian . . . not the G# Ionian that would mirror the previously established relationships. After this two bar phrase is repeated with small variations, we find ourselves back where we began in E Lydian.

There are brief excursions into so many different Lydian tonalities in Prelude # 5 that I’m tempted to call it the “Lydian Prelude” . . . but we’ll stick with the numeric nomenclature.

The next six bars reference all the ideas and tonalities first presented in bars 1 through 8, bringing us to the concluding two-bar vamp, which is repeated in a manner designed to set up a final cadence to B Major . . . the key where E Lydian originates! In the process we pass through: D∆, F#7, g#–/B, B6/F#, E/G#, G∆7, f#–11, bØ7/F, and E Mixolydian (represented as D/E to A/E to D/E to E). Then, using a chromatic bass line exploiting the intervallic similarity from an E Major scale, the whole two-bar vamp-like phrase repeats with a different final chord in bar 28: G7. All of this brings us to the final cadence in bar 29, which mirrors the primary theme in bar one for two beats before we use a simple E/F# that converts via the bass line to an E Major chord creating a variation on a plagal cadence to both end on B Major and reinforce the fourth degree nature of our initial Lydian tonality: E Lydian.