Prelude # 6 from 12 Preludes for Solo Guitar by Ken Hatfield 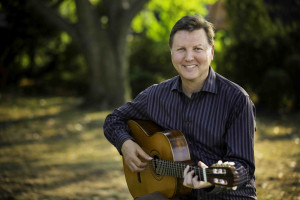 The first thing the observant will notice about Prelude # 6 (at least after the rubato intro) is that it is a samba. But unlike most sambas, which are in 2/4, this one is in 3/4.

To perform this prelude correctly you must understand its rhythmic structure and play it with the right feel. You must also understand what is happening harmonically and grasp its form. But without the proper feel, the piece simply will not work.

For this particular prelude, separating the harmonic from the rhythmic is futile. But you still must recognize the individual parts within each phrase, whose roles are essentially:

(1) The bass part, i.e., the bottom voice (which is rhythmically based on what a low-pitched drum like a surdo would play in a classic escola de samba). This part is generally comprised of quarter notes, which are beamed down in the printed music.

(2) The middle part, which is generally the meat and potatoes of the chordal structure (i.e., the 3rd and/or the 7th, etc., of the chord happening at any moment). This is where most of the rhythmic motion and syncopations occur. If you’re familiar with Brazilian music, you’ll recognize these syncopated rhythms immediately. This part resembles what a cavaquinho might play in a choro band, and is analogous to comping.

(3) The top part, which is the top voice or line, most of which is beamed up in the printed music and functions loosely like a melody line.

But this samba is in 3/4! Despite this difference, the rhythms are still based on those of a samba. And, like most sambas, the rhythmic phrases are still grouped into two-bar phrases, with the second bar concluding differently than the first. In most music that is constructed of phrases, the phrases generally function as either (1) closed statements (analogous to a declarative statement) or (2) as open-ended ideas requiring continuation. When put together in sequence this can feel like a question followed by an answer. This is often referred to as “antecedent and consequent” phrasing. In the first section (bars 9 through 20 and 21), the final beat of the second half of each phrase (i.e., 2nd bar) ends squarely on a quarter note (beat 3), sans syncopation, creating a sense of yearning  . . . longing  for something to occur/happen/continue. What happens here is the repeat (rhythmically) of the first bar (which ends on the and of three, crying out questioningly for continuation). This structure makes the phrase feel like a question whose answer requires further elucidation. This entire two-bar rhythmic sequence is mirrored throughout the piece, even when the harmonies change (as they do often, such as in bars 14 and 15), and/or where the voices/parts are displaced (as they are in the eight-bar section from bar 38 through bar 45).

I cannot emphasize enough the importance of playing this kind of music as if the parts are individual, separate, rhythmic/melodic roles, despite all the parts being played simultaneously by one person on one instrument. Do not get lulled into playing, hearing and feeling these separate parts as an aggregate rhythm! The bottom is the bass, the middle is the comping, and the top is the melody. Make it sound and feel that way.

Let’s examine the form and some of the key harmonic relationships in Prelude # 6.

The rubato intro is to be played in a style reminiscent of the recitative sections often found in the verses of arias from operas and songs from Broadway shows—in other words, freely, almost as if spoken, as often occurs in stage/theatre music. It’s a bit ironic that this opening introduces a prelude, considering how preludes themselves began as generic intros, making this an intro to an intro of sorts, and that an approach associated with vocal music is being used in a prelude, given that preludes are one of the first known forms designed specifically for non-vocal music. All of this shows how flexible preludes are.

Harmonically the chords of this eight-bar intro are based on the descending form of a g# minor (i.e., Aeolian) scale. I do this by following a bass line built on the first four notes of a descending Aeolian scale . . . played twice. The first time (bars 1 through 4) contains chords diatonically found in g# Aeolian, until the D#7  (V7) in bar 4. The second time (bars 5 through 8) uses the same descending bass line but is in G# Major (starting out as Mixolydian, before moving to bVI, also functioning as subV of V and then to V7 and ultimately a substitute V7) harmonized as: G#∆, G#7/F#, E∆7, D#7, D#+, to A7(13).

All of this sets up the tempo and the prime groove of this prelude as a samba in 3 for the next twenty-four bars. The first four bars of this section (bars 9 through 12) are in g# Dorian and are basically a II V with alternating endings that result in an antecedent and consequent phrase, which is repeated twice. The next two bars are in E Lydian (bars 13 and 14). We then repeat the g# Dorian idea for two bars (bars 16 and 17) before moving up a fourth to c# Dorian for another II V of the relative Major (actually B to E/B). That gets us to an a#Ø7 functioning as the relative II half diminished chord connected to the substitute V7 chord (A7 and A7#11) in the first ending; this sends us back for a repeat of this 24-bar section. The second ending is another II V of sorts over a pedal: D#sus4 to D#7+#9 functioning as II V of the Ab Major where the next section begins. This move to Ab Major was foreshadowed by the move from g# minor to G# Major that occurred in the intro.

The next four bars (bars 22 through 25) employ two ways of establishing and reinforcing a Major tonality by using chords from the subdominant minor region: db–6 and Gb13, in essence employing the fb characteristic of subdominant minor in this key (Ab) to exploit a second leading tone that suggests a downward resolution to the fifth of the Ab Major chord. This works even though that Eb is only implied as the first overtone of the root of the Ab . . . but not actually sounded. The second time this idea is played (bars 24 and 25) the Gb13 is reinterpreted to function as V of bIII, and the next two bars (26 and 27) are a mirror of bars 22 and 23 a minor third higher. This brings us back to a repeat of bars 22 and 23 in Ab, setting up a recap of the second half of our primary idea. In other words bars 30 through 37 essentially mirror bars 13 through 20, though the last bar is different this time in keeping with its structural harmonic function: G#∆ to A7(13). The A7 functions both as a sub V of the G# and as V of the d–11 that begins the next section (starting on bar 38).

Like many of the preceding sections, the next 8 bars (38 through 45) use a basic harmonic relationship to create a phrase which contains one or more chords that have a chameleon-like character which facilitates harmonic reinterpretation, making it possible to move smoothly to what may appear (to some) to be unrelated tonalities. We start with d–11 to e–/Ab (which is a form of abo∆7) in bar 38, then use the same d–11 but go to Bb7#11 in bar 39. Then the next two bars (40 and 41) mirror bars 38 and 39 but a fifth lower (i.e., a–11) with different “answering” chords (which are actually substitutes for each other): F7#11 in bar 40 and B7/Eb in bar 41. Bars 43 and 44 repeat bars 38 and 39, though the last chord is enharmonically spelled as A#7#11 to suggest its relationship as a substitute for V of the b–11 that begins another mirror of the basic pattern this section is based upon in bars 44 and 45, yielding: b–11 to db–/F (bar 44) followed by e–11 to F#/G (functioning as go∆7), which leads to the final recap of the prelude’s primary thematic material comprising bars 46 through 56 (which mirror bars 9 through 19).  Again, I take advantage of the harmonic flexibility of the chords in bars 57 and 58 to create a vamp that mirrors the first bridge’s initial move to the parallel Major in bars 22 though 25. This vamp functions as a segue to the ending, which itself is a variation on the famous “Picardy third,” in that it concludes a prelude in a minor key with the parallel Major tonic chord.