Prelude # 7 from 12 Preludes for Solo Guitar by Ken Hatfield 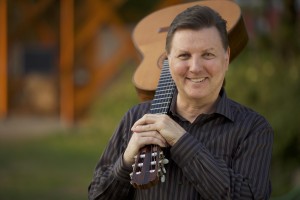 Prelude # 7 is one of the shortest of the 12 Preludes in this collection. It is also one of the pieces that feels most like a prelude (but in ways that differ from Preludes # 1 and   # 3, two others that we have already addressed which also feel like traditional preludes). Despite its less than traditional harmonic content, it successfully feels like it sets up something. In other words, it creates a sense of anticipation. It does so by using chordal structures which are diatonic to non-traditional tonalities to create a sense of mystery. Several of these tonalities commonly occur in non-western traditions like flamenco, gypsy and klezmer musical styles. Others have origins that are a bit more modern. For more information about the scales I’ll reference below, please check out Nicolas Slonimsky’s Thesaurus of Scales and Melodic Patterns, Vincent Persichetti’s Twentieth-Century Harmony, George Russell’s Lydian Chromatic Concept of Tonal Organization, and my own Jazz and The Classical Guitar: Theory and Application.

The next five bars move through a series of “chords” from several different but closely related tonalities, in essence following a descending bass line (b Aeolian) for bars 5 through 7. The chords are: B∆b6 (coming from B Harmonic MAJOR), followed by a–6 (using both the Major 6th and the flat 7th, idiomatic of a Dorian) in bar 6, moving to G∆7  (again sounding both the F# and the open G natural, this time functioning respectively as Major 7 and the octave of the root of the G chord) in bar 7. The next bar (bar 8) visits a secondary dominant chord (V of the V that is actually our tonic . . . so far) yielding: c#Ø11, to c#Ø/G, converting to C#7+ becoming C#7b5 (these last two with the root implied, but not played, and voiced over the b7 in the bottom voice). This leads to a series of diatonic ascending thirds over an F# pedal taken straight from f#HM5, which could not be more emblematic of this tonality!

The next nine bars (bars 19 through 27) are a repeat of the first nine with bar 27 differing from bar 9. Bar 27 uses two lines moving contrapuntally in contrary motion to cadence to b Melodic minor.

This leads us to the final nine bars, which are essentially a vamp that should feel like running out of fuel. The harmonic structures I created here are chords of sorts, but I hear them as being representatives of the specific tonalities they originated in, so I’ll describe/analyze them accordingly: (bar 28) = b Melodic minor; (bar 29) = C Whole tone; (bar 30) = repeat of bar 28; (bar 31) = a Melodic minor. The next four bars repeat the previous four bars with a rallentando and a fermata.

Consider the relationship between the last chord: a–6 (with its 6th degree being F# and its possible interpretation as an inversion of f#Ø7) and the first chord: F#∆(add 4) by comparing their respective tonalities (f#MM6 or a Melodic minor and f#HM5). When doing so, investigate how many common tones they share, and you’ll get some insight into how this whole prelude works.