Prelude # 8 from 12 Preludes for Solo Guitar by Ken Hatfield 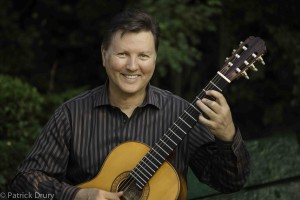 Like the previous 7 preludes, Prelude # 8 is one of a group of 12 Preludes I composed for solo guitar performance.

The form and harmonic content of this prelude resemble AABA song form for most of its structure (measures 1 through 26) with an 8-bar ending section comprised of a 4-bar antecedent and consequent phrase played twice (bars 27 through 34).

Let’s examine the four basic sections of this prelude. The first 8 bars (bars 1 through 8) begin by establishing the prelude’s key: Db Major. This is done by using I to the IV/I chords (Db∆7 to Gb/Db) in bar 1.  Bar 2 moves to what is in essence Cb Mixolydian employing a variation on what would be a Modal dominant cadence in this tonality: Cb to E/A.  The next two bars (bars 3 and 4) harmonically repeat bars 1 and 2, with melodic and phrasing variations. The first ending is a series of II Vs functioning as a “turn around” because it turns us back to where we began, by moving as follows: a secondary II V, i.e., II–7 (also VI–7) to sub V7 of V (b♭–11 to A7b5) in bar 7, to II V of I over a pedal, i.e., Absus4 to F/Ab (which is functioning as: Ab13b9) in bar 8.

This entire section repeats with the exception of the second ending replacing the first ending, in keeping with the AABA form mentioned above. Just like the first ending had a specific harmonic function, i.e., turning us around to get back to where we began, the second ending has its own specific harmonic function. The second ending takes us to the bridge, which begins in E Major. It achieves this smooth move by beginning on the IV chord (Gb) in relation to our key signature (Db), but quickly uses the note necessary to suggest that this Gb is no longer the IV of Db, but may be the I of Gb, . . . i.e., Cb. Notice how this note (the natural 4 of Gb) occurs in three of the five chords in the second ending as we move diatonically, passing through chords whose function in Gb would be: I∆(add4), II–(add2), III­­­­­–11, IV∆9, to V9 to IV/V to V (over a Db pedal).

Without explaining deceptive cadences it is difficult to completely demonstrate why the Db that concludes the second ending gets us convincingly to E Major in bar 11. We don’t really have the space to cover this in detail here, so while I’ll give you a brief explanation, I do encourage you to investigate deceptive cadences; they occur often in harmonically intelligent music. The short explanation is that since Db can function as V of Ab, and this Ab is enharmonically identical to G#, we can move to any chord containing this G#(Ab). Well, E Major has this G# as its ∆3rd!

So we find ourselves in E Major as the bridge begins. But like the rest of Prelude # 8, even this tonality will be played off against a contrasting one. So in bar 12 we find e– 7, to D∆9, to A∆(add2) all over an A pedal . . . essentially contrasting E Major (Ionian) in bar 11 with chords from an A Mixolydian tonality in bar 12. While bar 13 contrasts the same E Major (using a similar phrase) with A Major (Ionian this time), bar 15 revisits the same E Major idea but in a different inversion and contrasts it with a mirror of the previous answers but in A Dorian this time. This all brings us to a mirror of bar 8 in bar 17 (i.e., Gb/Ab to F/Ab), which moves up a minor third in bar 18 to A/Cb to Ab/Cb before employing a co triad functioning as a substitute for V of Db (i.e., Ab7) to get us back to a repeat of the first eight bars . . . essentially A3 of our AABA form, with a slight variation in bars 25 and 26 that sets up another deceptive cadence to the first chord of our tag/vamp ending.

Harmonically speaking, the last eight bars comprising the ending are a 4-bar phrase repeated that sets up the final deceptive cadence which brings us back to where we began in Db. This is all achieved by yet another set of contrasting tonalities comprised of: A∆(add2) to g#–/B (or B6) suggesting A Lydian in bar 27 contrasted with the same two chords for the first half of bar 28 followed by F#∆7 to E∆7 in the bar’s last two beats.This all repeats with a different final bar (bar 30), which contains yet another contrasting answer: E/B to B∆. This entire four bars then repeats again deceptively cadencing on our tonic Db by means of a classic Aeolian bass line that ascends: A♮, B♮, Db, with all three chords being Major, functioning as bVI to bVII to I∆.