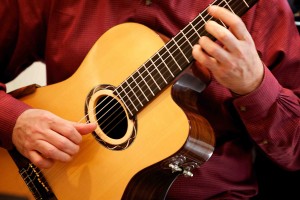 I am often surprised by how daunting many students find playing in higher positions on the guitar to be. Perhaps my dismay is due to the fact that my early mentors insisted that I play anything I learned in every place I could duplicate it on the fingerboard. But whatever the reason, for quite some time I’ve been examining basic elements of my approach that facilitate viewing the fingerboard as an easily navigable grid, much like the layout of most of Manhattan Island (excluding the few areas, like the Village and lower Manhattan, which do not fit into the grid). This grid allows you to find your way by simply knowing that the streets go east and west, while the avenues go north and south. This knowledge encourages exploration, and this exploration safely familiarizes you with the actual content of the various neighborhoods that comprise the island of Manhattan.

So why do some students find it so difficult to navigate the higher positions of the fingerboard? Investigating this question led me to certain observations and realizations. Here I’d like to begin a series of explorations of these realizations in an effort to aid those having difficulty navigating the entire fingerboard.

I’ll begin with what I call “touchstone” or “duplicator” notes:

1. Most guitar students learn pretty early how to tune their instrument, though many now rely so exclusively on digital tuners that they may not realize how the traditional method of tuning at the 5th fret for all strings except the “B” on the “G” string (which of course is tuned at the 4th fret) aids them in mapping out the fingerboard.

3. These touchstone/duplicator notes replicate both in unison and in octaves (as illustrated in the “Touchstone Note Duplication/Fingerboard Diagram” included in this guitar tip).

4. Using these touchstone notes (in unison and in octaves) will help you find your bearings anywhere on the fingerboard, because any note from the chromatic scale (which contains all 12 notes of our musical system) will never be more than a half step (i.e., one fret) or whole step (i.e., two frets) away from one of these touchstone notes. This means that, if and when you find yourself in unfamiliar territory, the pitch name of any note whose identity is in question can quickly be discerned by locating the nearest touchstone note and calculating the intervallic distance (i.e., half step or whole step up or down) between the touchstone note and the note in question to name the unidentified note. By the way, for those unfamiliar with the term, an interval is a unit for measuring the distance between notes. In our musical system the smallest unit of measure, or interval, is a half step. Each half step corresponds to one fret on the fingerboard.

For example, when trying to discern the name of the note located at the 10th fret on the “G” string, begin by looking for the nearest touchstone note. In this case, the note in question is a half step (i.e., one fret) above the “E” located at the 9th fret on the same string, and this “E” is a duplication of the pitch of the open high “E” string. So the note located at the 10th fret on the “G” string (which is a half step or one fret higher in pitch than the “E”) is an “F”. This same “F” is is also a whole step (i.e., two frets) below the octave duplication of the open “G” string, which, like all strings, produces its octave at the 12th fret. Once you become familiar with this method, you can quickly find any note and discern the pitch name of any note anywhere on the fingerboard. And the more you do it the more you begin to know where all the notes are . . . anywhere on the fingerboard, in virtually any context!

5. Of course, effectively using this method requires the student to indeed learn the location and identity of these touchstone notes, as well as the basic layout of the 12-note chromatic scale, and how it corresponds to the intersection of the frets and strings throughout the fingerboard. At a later point I will address the visual recognition of ‘”interval shapes” and the even more important aspects of relating those shapes to aural recognition of interval sounds.

But for now, as a first step to facilitate familiarizing yourself with the fingerboard grid, I’ve created the chart above showing where each open string’s pitch exists, and where each of those pitches is duplicated in both unison and in octaves on each string through the first 12 frets of the guitar fingerboard. Notice how in unison the options decrease as you go up the fingerboard and travel to the lower strings. Consequently, the pitch of the high “E” string has the most places where its pitch is duplicated in unison (5 on most guitars, and 6 on some or if you use harmonics and go above the 12th fret), while the pitch of the low “A” can only be duplicated in unison on the low “E” string at the 5th fret.

This is the first in what I plan to be a series of tips designed to help expand your way of viewing and navigating the guitar fingerboard.