Jazz and the Classical Guitar Press 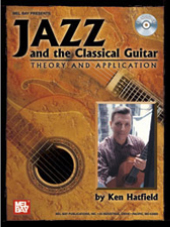 Ken Hatfield, a very fine jazz and classical guitarist and an impressive musical historian offers to the classical guitarist, perhaps for the first time in such an exhaustive manner, a primer on effective jazz techniques that are employable specifically to the classical guitarist.  Outlining from the most basic theoretical considerations to quite complex jazz permutations, polytonality, etc., this exhaustive treatise is a true history lesson on the workings of jazz in a comprehensive and highly accessible format.  With dozens of examples, exercises, and original compositions by Ken, you will have access to the mind of one of the true innovators in jazz on the nylon string guitar.  His enclosed CD is an illumination on the potential of the instrument in a jazz setting and all works are transcribed within the folio.

A hefty tome indeed; not one to drop on somebody’s head from a great height, or you could seriously damage their health!  Happily it is spiral bound; otherwise you would never keep it open. I have seen and heard Ken Hatfield’s music in the past and he is obviously steeped in jazz knowledge.  This latest book is everything that the classical guitarist would want, should he be considering venturing into the heady world of jazz and all its implications.

Music for Guitar and Bass

To Be Continued . . . Ken Hatfield and Friends

Play the Music of Bill McCormick

Etudes for Solo Guitar in 24 Keys

Jazz and the Classical Guitar

Etudes for Solo Guitar in 24 Keys

To be fair even those players who think they know most of it already might be astonished at how much they don’t know after reading this book for no detail is spared.  Just a glance at the chapter headings gives you an idea.  They begin with Major and Minor tonalities and their scales and chords, followed by Modal Jazz, Secondary Dominant Chords, Substitute Dominant Chords, Two Five Progressions, Subdominant Minor, Vagrant Chords, Polytonal Chords, Quartal Harmony and Voicings in Fourths, and so on.

If you have ever wondered why a particular chord is harmonized in such a way in jazz music, then you would find the answer in this book and not only the ‘why’ of it but also how you would go about thinking of using such a chord and how its harmonies would fit into the context of the following music.  Fascinating stuff.  If he has left anything out of this book, I couldn’t think what.

It is not light reading however, as the complexities of the material necessitate considerable concentration from the player/listener (there is plenty to play and listen to also) and you do have to take it in stages but it is well worth the effort.

One quibble however, albeit a small one.  For some reason I do not understand, Hatfield substitutes the words, Major, Minor, Diminished, Perfect and Augmented with symbols and I don’t know about you the reader but I have always been hopeless at that sort of thing and found myself constantly having to return to the table to refresh my memory as to which was which symbol!

Nevertheless this is a magnificent work that cannot fail to be appreciated by anyone who reads it and just as a theoretical book alone it covers areas for the guitarist I have never seen covered before.

Intended for serious music students, Ken Hatfield’s book discusses harmonic theory in detail and offers the reader a thorough foundation for approaching jazz improvisation; either as a career, or for the pleasure of performing alone or with a group. While the book focuses on acoustic guitar, it’s intended for anyone who already knows how to read music, how to play an instrument, and who wants to learn about improvisation.

The author feels that you’ve got to be prepared if you’re to get optimum enjoyment from jazz performance. Therefore, his discussion includes scales and exercises as well as harmonic structure, song form, and numerous examples. The musical notation is included and analyzed. You come away from a study session with Hatfield’s book, and included CD, armed with tools that can help produce immediate results.

A thorough explanation of the seven modes of the Major scale, the cycle of fifths, the related minor scales, chord progressions, twelve-tone harmonic theory, quartal harmony, tertian harmony, the blues, and jazz standards takes the reader on a whirlwind tour of music’s universal language. A glossary of terms is included for clarification and study. Hatfield complements each topic with examples from the jazz world and illustrates his points with musical notation and analysis.

Whether the reader is a student or a professional, much benefit is to be gained by working with the included exercises.